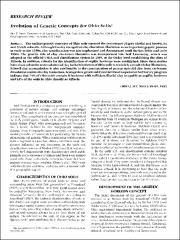 The earliest genetic concepts of Ohio soils stressed the occurrence of gray eluvial and brown, Fe and Al rich subsoils. Although Conrey recognized clay eluviation-illuviation as an important genetic process as early as the 1930s, clay translocation was not emphasized and documented until the late 1950s and early 1960s. The genetic role of clay eluviation-illuviation was incorporated into Soil Taxonomy, which was adopted as the official USDA soil classification system in 1965, at the Order level establishing the class of Alfisols. In addition, criteria for the identification of argillic horizons were established. Since then studies have shown that the accumulation of clay in the B horizons of Ohio soils is not solely a result of clay illuviation. Subsoil clay accumulation is also attributable to the concentration of parent material clay from carbonate dissolution andiw situ clay formation. Acreage data generated from the Ohio Cooperative Soil Survey program indicate that 75% of Ohio soils contain B horizons with sufficient illuvial clay to qualify as argillic horizons and 62% of the soils in Ohio classify as Alfisols.