Climatological Aspects of Drought in Ohio 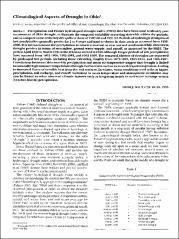 Precipitation and Palmer hydrological drought index (PHDI) data have been used to identify past occurrences of Ohio drought, to illustrate the temporal variability occurring statewide within dry periods, and to compare some of the key dry spells to those of 1987-88 and 1991-92. Periods of hydrologic drought and low precipitation generally persist for 2 to 5 years and tend to cluster in time, such as occurred from 1930-1966. It is not uncommon for precipitation to return to normal or near normal conditions while short-term drought persists in terms of streamflow, ground water supply, and runoff, as measured by the PHDI. The period April 1930 to March 1931 is the driest on record in Ohio although longer periods of low precipitation have occurred from 1893-1896, 1952-1955, and 1963-1965. The temporal clusters of droughts are separated by prolonged wet periods, including those extending roughly from 1875-1893, 1905-1924, and 1966-1987. Correlations between Ohio monthly precipitation and mean air temperature suggest that drought is linked to unusually high summer temperatures through mechanisms such as increased evapotranspiration, leading to increased fluxes of sensible heat from dry soil surfaces. In winter, warm conditions tend to favor higher precipitation, soil recharge, and runoff. Variations in mean temperature and atmospheric circulation may also be linked to other observed climatic features such as long-term trends in soil-water recharge season (October-March) precipitation.