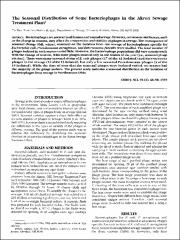 Bacteriophages are present in all human and animal sewage. However, environmental factors, such as the change in seasons, may affect the composition and viability of phages in sewage. The consequence of seasonal change (fall, winter, summer) on the isolation from raw sewage of bacteriophages specific for Escherichia colt, Pseudomonas aeruginosa, andEnterococcus faecalis were studied. The total number of phages isolated in each season varied little. However, the bacteriophage populations did vary concurrently with the change of seasons, with some phages isolated only in one season of the year (i.e., seasonal phage strains). There were many seasonal strains of E. coli phages (17 of the 43 isolated) and Enterococcus phages in the sewage (12 of the 15 isolated), but only a few seasonal Pseudomonas phages (3 of the 15 isolated). While the time of year that the seasonal phages were isolated varied, no season had the majority of the phage isolates. The present study indicates a seasonal distribution in the isolation of bacteriophages from sewage in Northeastern Ohio.