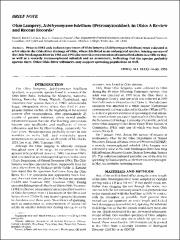 Prior to 1983 only isolated specimens of Ohio lamprey {Ichthyomyzon bdellium) were collected at a few sites in the Ohio River drainage of Ohio, where it is listed as an endangered species. Seining surveys of the Little Muskingum River in 1983 and 1992 discovered a concentration of unattached adults in a riffle in May, as well as a recently metamorphosed subadult and an ammocoete, indicating that the species probably spawns there. Other Ohio River tributaries may support spawning populations as well.