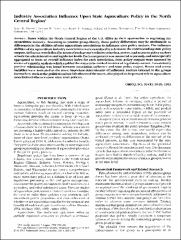 States within the North Central Region of the U.S. differ in their approaches to regulating the aquaculture industry. According to interest group theory, these policy differences may be attributable to differences in the abilities of state aquaculture associations to influence state policy makers. The influence abilities of six aquaculture industry associations were examined in relation to the corresponding state policy outputs. Influence was defined in terms of each group's relative cohesion, power, and access to policy makers at both the administrative and legislative levels. Each component was measured separately and subsequently aggregated to form an overall influence index for each association. State policy outputs were assessed by means of a matrix analysis which enabled the states to be ranked in order of regulatory control. A moderately positive relationship was found between association influence and state policy output. Power and access variables were indicated as the more important determinants of influence. Factors external to the groups themselves, such as the political and social cultures of the states, also played an important role in aquaculture association influence upon state-level policies.