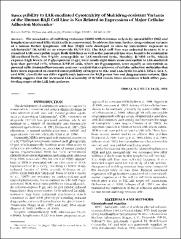 The association of multidrug resistance (MDR) with resistance to lysis by natural killer (NK) and lymphokine-activated killer (LAK) cells is controversial. To address this issue further, drug-resistant variants of a human Burkitt lymphoma cell line (RAJI) were developed in vitro by intermittent exposure to Adriamycin® (R/ADR) or to etoposide (R/VP-16). The RAJI cell line was selected because it is a standard LAK-susceptible target. Both MDR lines as well as the parent cell line were found to be resistant to NK-mediated lysis, but highly susceptible to LAK-mediated lysis. Notably, R/ADR cells, which express high levels of P-glycoprotein (P-gp), were nearly eight-times more susceptible to LAK-mediated lysis than parental cells, whereas R/VP-16 cells, which are P-gp-negative, were equally as susceptible as parental cells. Immunofluorescence analyses revealed that expression of cellular adhesion molecules that have been reported to control susceptibility of targets to NK- and LAK-lysis (ICAM-1, LFA-1, LFA-3, and MHC class I) did not differ significantly between the RAJI parent line and drug-resistant variants. This finding suggests that the increased LAK-sensitivity of R/ADR results from alterations which affect postbinding stages of the LAK lytic pathway.