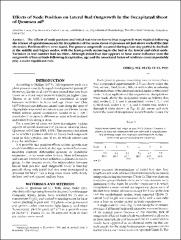 The effects of node position and initial bud size on lateral bud outgrowth were studied following the release of apical dominance by decapitation of the main shoot of Ipomoea nil just above each of the first six nodes. Position effects were found. The greatest outgrowth occurred during a four-day period in the buds at the middle and higher nodes, with the least growth occurring in the bud at the lowest and oldest node. Variation in leaf number had no effect. Although initial bud size appears to have some influence over the outgrowth of lateral buds following decapitation, age and the associated factor of inhibitor content probably play a more significant role.