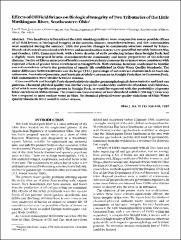 Two headwater tributaries of the Little Muskingum River were compared to assess possible effects of oil field brines on biological integrity of the streams. Diatom, macroinvertebrate, and fish communities were analyzed during the summer, 1990, for possible changes in community-structure caused by brines. Dissolved chemicals associated with brines and natural surface waters were quantified monthly between May and October, 1991. Cranenest Fork, with a lower density of wells producing brines than Straight Fork, had a slightly more integrated benthic macroinvertebrate community and lower proportions of salt-tolerant diatoms. Twelve of fifteen measures of benthic macroinvertebrate community structure were consistent with expected effects of greater brine enrichment in Straight Fork. Both streams, however, conformed to benthic macroinvertebrate criteria for protection of aquatic life established in Ohio Water Quality Standards. The major difference between streams was the larger (13:1) percentage of salt-tolerant diatoms such as Navicula salinarum,Navicula tripunctata, andNavicula viridula v. avenacea in Straight Fork than in Cranenest Fork. Fish communities were similar between streams.