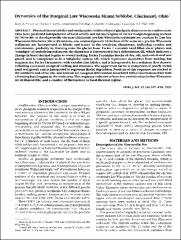 Physical characteristics and stratigraphic relationships of glacigenic diamictons in southwestern Ohio have permitted interpretation of local activity and thermal regime of the ice margin beginning at about 19,700 yr BP. At the Sharonville site near Cincinnati, pre-late Wisconsin sediments are overlain by four late Wisconsin lithofacies (three diamictons, one sand and gravel). At the base of the sequence, pre-late Wisconsin sediments are incorporated as blocks and lenses in the overlying diamictons, indicating erosion and entrainment, probably by freezing onto the glacier base. Facies 1 contains sand-filled shear planes and smudges of underlying sediments; the diamicton is interpreted to be a deformation till, which indicates a change in basal thermal regime to overall melting. Facies 2 contains blocks of clay, silt, and sorted sand and gravel, and is interpreted to be a subglacial meltout till, which represents deposition from melting, but stagnant, ice. Facies 3 is massive, with variable clast fabrics, and is interpreted to be a sediment flow deposit, reflecting continued marginal melting and recession. The uppermost facies is comprised of poorly sorted sand and gravel, and is interpreted to represent fluvial deposition. Portions of this sequence are stacked at the southern end of the site, and indicate ice-marginal deformation associated with a reactivation of ice with a freezing basal regime in the study area. This sequence indicates at least two periods of active late Wisconsin ice at Sharonville, and a number of fluctuations in basal thermal regime.