Occurrence and Distribution of Polygonum Species in Ohio 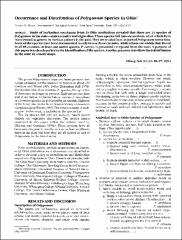 Study of herbarium specimens from 23 Ohio institutions revealed that there are 24 species of Polygonum in the state—sixteen native and eight alien. These species fall into six sections, all of which have been treated as genera by various authors in the past. They are treated here as part of Polygonum sensu lato. Some of the species have been documented in only two or three counties, while others are widely distributed in all 88 counties. At least one native species, P. careyi, is presumed extirpated from the state. A purpose of this paper is to develop a key to the identification of the species. Another purpose is to show their distribution in the state by county maps.