Centennial Research Review: Changes in Knowledge of the Vascular Plant Flora of Ohio, 1860-1991 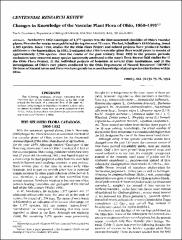 Newberry's I860 Catalogue of 1,377 species was the first annotated checklist of Ohio's vascular plants. Five similar works were published during the next 72 years. The last, Schaffner's 1932 Catalog, listed 2,309 species. Since 1950, studies for the Ohio Flora Project and related projects have produced further additions to the known flora. In 1961,1 estimated that Ohio's vascular plant flora would prove to consist of approximately 2,700 species. Over the course of the past century, from 1893 to the present, periodic exclusions have removed many species incorrectly attributed to the state's flora. Recent field studies for 1) the Ohio Flora Project, 2) the individual projects of botanists at several Ohio institutions, and 3) the investigations of Ohio's rare plants conducted by the Ohio Department of Natural Resources' (ODNR's) Division of Natural Areas and Preserves have greatly increased knowledge of plant species distribution within Ohio.