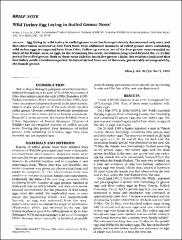 Egg laying by wild turkey in ruffed grouse nests has been previously documented only once and that observation occurred in New York State. Four additional instances of ruffed grouse nests containing wild turkey eggs are reported here from Ohio. Follow-up visits at two of the four grouse nests revealed no trace of the female, nest, or eggs. In the remaining two nests, incubation progressed beyond the 23-24 day period for ruffed grouse. Both of these nests failed to hatch live grouse chicks, but evidence indicated that two turkey poults (incubation period 28 days) hatched from one of the nests, presumably accompanied by the female grouse.