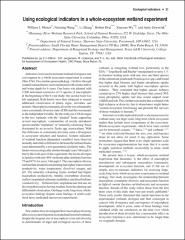 Indicators were used to estimate wetland divergence and convergence in a whole ecosystem experiment in central Ohio, USA. Two similar-geomorphology, 1-ha flow-through created wetland basins were maintained with similar inflow and water depth for 6 years. One basin was planted with 2,500 individual rootstocks of 13 species of macrophytes at the beginning of the 6-year study; the second basin was left unplanted. Both basins were then subjected to natural additional colonization of plants, algae, microbes, and animals. Macrophyte community diversity was estimated by a new community diversity index (CDI) and this was treated as the independent variable. By the sixth year, CDI diverged in the two wetlands with the “planted” basin supporting several macrophyte communities of mostly introduced species and the “unplanted” or “naturally colonizing” basin dominated by an invasive Typha spp. monoculture. With this difference in community diversity came a divergence in ecosystem structure and function. Sixteen indicators of wetland function (dependent variables) were observed annually and relative differences between the wetland basins were determined by a non-parametric similarity index. The basins were ecologically similar through years 3 through 5, but by the sixth year of the experiment, the basins diverged in function with only 44% similarity after similarity between 75 and 87% for years 3 through 5. The macrophyte-diverse wetland that resulted from planting had higher water column productivity, water temperature, dissolved oxygen, and pH. The naturally colonizing Typha wetland had higher macrophyte productivity, benthic invertebrate diversity, outflow suspended sediments (turbidity), and dissolved ions (conductivity) . Different bird, amphibian and fish use are also hypothesized as having resulted from the planting and differential colonization. Our large-scale, long-term, wholeecosystem findings dispute some findings of small-scale, short-term, replicated mesocosm experiments.