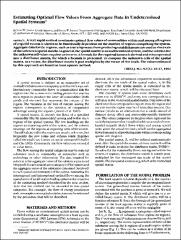 A very rapid method to estimate optimal flow values of commodities within and among all regions of a spatial system is shown to be functionally dependent on the number of regions comprising the system. Aggregate data for the regions, such as total shipments from producing establishments are used as rim totals of the unknown spatial matrix. In general, the spatial matrix is an undetermined system, and the solution for the unknown cell values requires an inverse. A formula for the required inverse is derived and is incorporated into a distributor matrix, for which a formula is presented. To compute the unknown cells of the spatial matrix, as a vector, the distributor matrix is post multiplied by the vector of rim totals. The values estimated by this approach are based on least squares method.