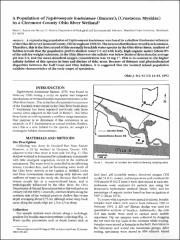 A reproducing population of Taphromysis louisianae was found in a shallow freshwater tributary of the Ohio River in Clermont County, OH throughout 1990-91. The nearest distribution record is in Louisiana. Therefore, this is the first record of this normally brackish water species in the Ohio River Basin. Analysis of habitat reveals that the population prefers shallow water (< 1 m) with leafy, high organic matter (about 8% of the soil dry weight) substrate. At the Ohio discovery site salinity was below limits of detection; the average pH was 6.5, and the mean dissolved oxygen concentration was 10 mg I1. This is in contrast to the higher salinity habitat of this species in bays and ditches of tidal areas. Because of distance and physiochemical disparities between the Gulf Coast and Ohio habitats, it is suggested that the isolated inland population exhibits characteristics of the early stages of speciation.