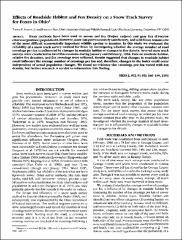 Many methods have been used to survey red fox (Vulpes vulpes) and gray fox (Urocyon dnereoargenteus) populations. However, none has proven entirely satisfactory, and wild foxes remain one of the most difficult economically important wildlife species to monitor. In this study we evaluated the reliability of a snow track survey method for foxes by investigating whether the average number of road crossings per fox is influenced by changes in roadside habitat or changes in fox density. Several snow track surveys were conducted in two Ohio counties during January and February, 1984. Data on roadside habitat, relative fox densities, and fox crossings were collected. Results suggested that changes in roadside habitat could influence the average number of crossings per fox and, therefore, changes in the index could occur independent of actual population changes. We found no evidence that crossings per fox varied with fox density, but further research is needed to substantiate this finding.