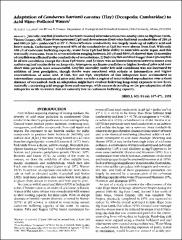 Juvenile crayfish [Cambarus bartonii cavatus] were taken from two nearby sites on Big Four Creek, Vinton County, OH. Water from upstream (UpS) and downstream (DnS) sites had total conductivities of 250 |iS and 600 \xS (|J,S = jimho/cm2) at 25° C. Non-carbonate conductivity was largely made up of sulfuric acid and heavy metals. Carbonates represented 40% of the conductivity at UpS but were absent from DnS. With only 100 (0.S of carbonate buffering capacity, water from UpS had little ability to neutralize acidic input, and this was easily overcome. Tests in seven solutions ranging between 250 (iS and 5000 \iS showed that: 1) mortality of crayfish was effected by the conductivity of test solutions, 2) DnS crayfish survived longer than UpS crayfish in all test conditions except the clean UpS water, and 3) there was no interaction term between source area and strength of conductivity on longevity. Attempts to acclimate crayfishes to higher levels of mine acid over short time periods were unsuccessful. Crayfish mortality under low acid conditions was not increased by addition of iron precipitate, though deaths were associated with ecdysis at intermediate and higher concentrations of mine acid. If DnS, but not UpS, crayfishes of this subspecies have acclimatized to intermediate concentrations of mine acid, then we infer a regime of semi-isolated reproduction over a short distance of streambed. Such an adaptation might have evolved following long—term exposure to low level, naturally—occurring acid seepage from coal outcrops, with success depending on the pre-adaptation of this subspecies to life in waters that are naturally low in carbonate buffering capacity.