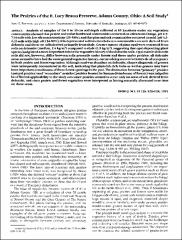 Analysis of samples of the 0 to 10-cm soil depth collected at 65 locations under six vegetation communities snowed that prairie and cedar-hardwood communities occurred on calcareous (range, pH 6.9-7.9) soils with low silt concentrations (20-54%), and that pine and oak communities occurred on acid (pH 4.3-6.3) soils with high silt (54-80%); this represented a distinction between communities on soils derived from dolomite and those on soils derived primarily from shale. Greater masses of plant opal were extracted from soils on dolomite (median, 2.4 kg/m2) compared to shale (0.9 kg/m2), suggesting that opal-depositing plant species had played a more important role in the vegetative history of the dolomite soils. Opal mass in dolomite soils did not, however, differ between soils presently under forests and those under prairies; all dolomite areas seemed to have had the same general vegetative history, one involving successive intervals of occupancy by both prairie and forest vegetation. Although opal was abundant on dolomite, shapes diagnostic of grasses were infrequently encountered in the soil, indicating that phytolith-rich forbs as well as grasses may have been important constituents of these forest openings in the past. The distinction between primary prairies (natural prairies) and secondary prairies (prairies formed by human disturbance of forests) was judged to be of limited applicability to the study area since prairies seemed to occur only on areas of soil derived from dolomite, and since prairie and forest vegetation were interpreted as having naturally alternated over time on these areas.