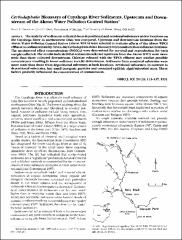 The toxicity of sediments collected from depositional and erosional substrates at two locations on the Cuyahoga River in northeastern Ohio was compared. Upstream and downstream locations from the Akron Water Pollution Control Station (Akron WPCS) were selected to evaluate effects of the Akron WPCS effluent on sediment toxicity. Seven-day Ceriodaphnia dubia bioassays were conducted on sediment elutriates. The no-observed effect concentrations (NOECs) were determined for survival and reproduction for each sample collected. The results indicated that sediments collected upstream from the Akron WPCS were more toxic than those collected downstream. Chlorine released with the WPCS effluent may oxidize possible contaminants resulting in lower sediment toxicity downstream. Sediments from erosional substrates were more toxic than those from depositional substrates at both locations. Erosional substrates, in contrast to depositional substrates, had small inorganic particles and contained epilithic algal/microbial mats. These factors probably influenced the concentration of contaminants.