The Distribution of Crayfishes (Decapoda: Cambaridae) of the Licking River Watershed, Eastcentral Ohio: 1972-1977 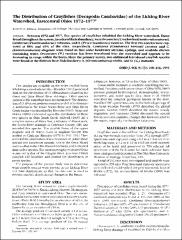 Between 1972 and 1977, five species of crayfishes inhabited the Licking River watershed. Those found throughout the system, in order of their abundance, were Orconectes (Crockerinus) sanbornii sanbornii, Cambarus (Puncticambarus) robustus, and O. (Procericambarus) rusticus. The first two species were captured at 88% and 49% of the sites, respectively. Cambarus (Cambarus) bartonii cavatus and C. (Lacunicambarus) diogenes were found in first order headwater streams, springs, and roadside ditches containing water. Orconectes (P.) rusticus has been introduced into the watershed and appears to be increasing its range within the basin. Since the primary survey, two additional introduced crayfish species were found at the Hebron State Fish Hatchery: O. (Gremicambarus) virilis, and O. (G.) immunis.