Evolution of Till Stratigraphy in Union County, Ohio 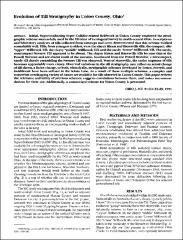 Initial, Superconducting Super Collider-related fieldwork in Union County employed the stratigraphic scheme successfully used by the Division of Geological Survey in north-central Ohio. Descriptions and laboratory analyses of tills collected from outcrops and cores demonstrated that this scheme worked remarkably well. Tills, from youngest to oldest, were the clayey Hiram and Hayesville tills; the compact, silty upper Millbrook Till; the clayey middle Millbrook Till; and the sandy lower Millbrook Till. The sandy, noncompact Navarre Till appeared to be absent. The clayey Hiram and Hayesville tills become thin at the Powell Moraine and are absent south of the moraine. Southward from the Powell Moraine, a noncompact, sandy till closely resembling the Navarre Till was observed. West of Marysville, the entire sequence of tills becomes appreciably more clayey. Observed variations in the till stratigraphy may reflect an actual change of till sheets, a facies change, or both. Historically, stratigraphic schemes developed by Totten, Forsyth, and Goldthwait have been utilized in the Scioto Lobe. As a result of these multiple schemes, a complex and somewhat overlapping variety of names are available for tills observed in Union County. This paper reviews the relevance and utility of previous schemes, suggests correlations between them, and makes recommendations for their use. Additionally, a summarized scheme for Union County is presented.