Correlation of the Three Tills of Logan County, Ohio 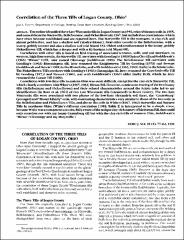 The author identified three Late Wisconsin tills in Logan County in 1956, related them to soils in 1965, and named them the Marysville, Bellefontaine, and Pickrelltown in 1967, but included no correlations, which have since become established and are reported here. The Marysville Till is the youngest, is clay-rich and almost pebble-free, and has a shallow soil (Morley-Blount). Next older (south) is the Bellefontaine, with a loamy, pebbly texture and also a shallow soil (old Miami 6A). Oldest and southernmost is the loamy, pebbly Pickrelltown Till, which has a deeper soil with a B3 horizon (old Miami 60).