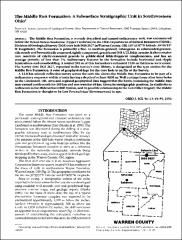 The Middle Run Formation, a recently described and named sedimentary unit, was encountered below the Mount Simon Sandstone (Upper Cambrian) in the Ohio Department of Natural Resources (ODNR), Division of Geological Survey (DGS) core hole DGS 2627 in Warren County, OH, (39°33'57N latitude, 84°06'51 W longtitude). The formation is primarily a fine- to medium-grained, subangular- to subrounded-grained, siliceously and hematitically cemented, tightly compacted, grayish-red (5 R 4/2), lithic arenite. It also contains rare intervals of calcite-cemented granule- to pebble-sized lithic-fragment conglomerates, and has an average porosity of less than 2%. Sedimentary features in the formation include horizontal and ripple laminations and crossbedding. A total of 582 m of this formation's estimated 1100-m thickness were cored. The Survey core DGS 2627, reposited in the Survey's core library, is designated as the type section for the Middle Run Formation. A suite of geophysical-logs for the core hole is on file at the Survey.