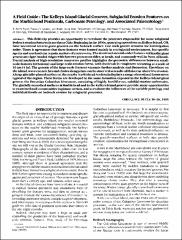 This field trip provides an opportunity to reevaluate the processes responsible for some subglacial bedrock erosion features in northern Ohio. Beginning in the 1830s, quarrying operations on Kelleys Island, OH, have uncovered several giant grooves on the bedrock surface. One such groove remains for investigation today. There is agreement that these features were formed mainly in a subglacial environment, but specific agents and mechanisms remain matters of controversy. The dominant second-order features within the giant groove are cigar-headed ridges with furrows present on sides, at heads, and commonly well in front of heads. Fractal analysis of high-resolution transverse profiles highlights the geometric differences between smallscale features (striations) and large-scale erosion forms, with the break in roughness occurring at a scale of 10 cm (4 in). The genesis of the large-scale features warrants further analysis and discussion. Elsewhere on the island, wave-cut notches and chutes along joints can be observed as results of Holocene shoreline erosion. A large glacially-planed surface on the nearby Marblehead Peninsula displays a range of erosional forms more typical of the region. These forms are developed in the same formation exposed in the Kelleys Island giant groove, the Devonian Columbus Limestone, consisting of highly fossiliferous, subtidal marine carbonates. The glacially smoothed surfaces at Marblehead and in the Kelleys Island groove provide many opportunities to examine fossil communities in planar section, and to evaluate the influences of the variable petrology and individual fossils on bedrock erosion by subglacial processes.