The Unionidae of the Chagrin River: The Remnant of a Molluscan Fauna 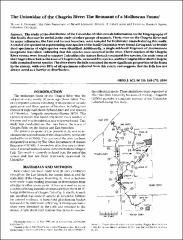 The study of the distribution of the Unionidae of Ohio reveals information on the biogeography of this family that may be useful in the study of other groups of animals. Thirty sites on the Chagrin River and its major tributaries, the East and Aurora branches, were sampled for freshwater mussels during this study. A total of 268 specimens representing nine species of the family Unionidae were found. Living and/or freshly dead specimens of eight species were identified. Additionally, a single subfossil fragment of Alasmidonta marginata was taken, indicating that this species once occurred in the river. Three reaches of the Chagrin River system were found to support Unionidae: the Aurora Branch contained five species, the main stem of the Chagrin River below the town of Chagrin Falls contained five species, and the Chagrin River above Chagrin Falls contained seven species. The river above the falls contained the most significant proportion of the fauna in the system, with over 80% of all specimens collected from this reach, and suggests that the falls has not always acted as a barrier to distribution.