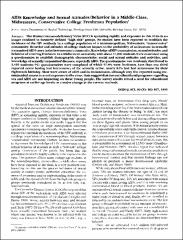 The Human Immunodeficiency Virus (HIV) is spreading rapidly and exposure to this virus is no longer confined to formerly defined high risk groups. No studies have been reported to establish the incidence of the HIV antibody in a college population of a nonmetropolitan, Midwestern, conservative community. Behavior and attitudes of college students impact on the probability of an increase in sexually transmitted AIDS cases in the heterosexual community. Knowledge of HIV transmission, sexual attitudes, and behavior of entering freshmen in a Midwestern university with about 17,000 students were examined using a questionnaire to establish demographic characteristics, social and sexual attitudes and activities, and knowledge of sexually transmitted diseases, especially AIDS. The questionnaire was randomly distributed to 1,450 students; 941 questionnaires were completed of which 97.8% were freshmen. Less than one third reported never having had intercourse; of the sexually active, nearly 82% had had intercourse by their eighteenth birthday. Most were aware of AIDS and its transmission, although very few reported using recommended means to avoid exposure to the virus. Data suggest that current educational programs regarding sex and AIDS are not impacting on these young people. The survey results reveal a need for educational programs at earlier age levels or a major change in the current methods.