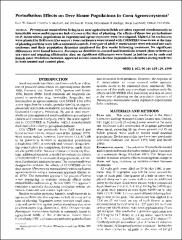 Peromyscus maniculatus living in or near agricultural fields are often exposed simultaneously to insecticide stress and temporary lack of cover at the time of planting. The effects of these two perturbations on P. maniculatus populations in experimental agroecosystems were investigated. Eight 0.1-ha enclosures were planted in field corn (Zea mayes). Four enclosures were treated with COUNTER® insecticide at the time of planting and four were left as untreated controls. Four pair of adult P. maniculatus were released into each enclosure and their population dynamics monitored for five weeks following treatment. No significant differences were found between Peromyscus densities in control and insecticide-treated plots or between sex ratios and trapping efficiencies. Also, no significant differences were found in habitat use by male and female mice. Predation, however, appeared to have caused a decline in population densities during week two in both treated and control plots.