Variation in the Airborne Fungal Spore Population of the Tuscarawas Valley with Respect to Microenvironment, Time of Day, and Date 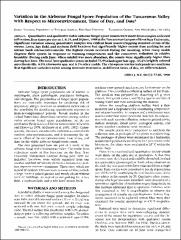 Quantitative and qualitative viable airborne fungal spore counts were made from samples collected at five sites, four times per day on 1,8,24, and 30 June, 1988 at the Tuscarawas Campus of Kent State University. Significant variation among quantitative samples was evident from nonoverlapping standard errors of the means. Lawn, hay field, and soybean field locations had significantly higher counts than parking lot and stream bank microenvironments. The highest counts occurred during the morning, when many molds disperse their spores in response to warming temperatures and the concurrent reduction in relative humidity. During early June, when rainfall was more abundant, the counts were significantly higher than during late June. The total June qualitative count included 73-5% Cladosporium spp., 13.4% brightly colored mycelia sterilia, 6.9% AUernaria spp. and 6.2% other molds. The chi-square test for independence confirms that significant variation exists among microenvironments, at different times of day, on different dates.