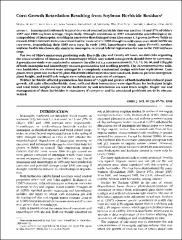 Imazaquin (trademark Scepter) is a weed control herbicide that was used on 15 and 37% of Ohio's 1987 and 1988 soybean acreage, respectively. Drought conditions in 1987 retarded the microbiological decomposition of imazaquin, resulting in carryover that damaged corn {Zea mays L.) grown in those fields so treated. Ohio's farmers were concerned that the more severe 1988 drought would cause even more herbicide carryover, jeopardizing their 1989 corn corp. In early 1989, imazethapyr (trade name Pursuit), another soybean herbicide chemically similar to imazaquin, received federal registration for use in the 1989 soybean crop.