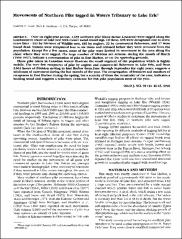 Over an eight-year period, 2,659 northern pike {Esox lucius Linnaeus) were tagged along the southwestern shore of Lake Erie with monel metal round tags. Of these, 698 were recaptured one to seven years later - 553 by Division of Wildlife nets, 106 by anglers, 22 by commercial fishermen, and 17 were found dead. Sixteen were recaptured four to six times and released before they were removed from the population. Except for a few strays, most of the pike were limited in movement to the area along the shore where they were tagged. The large number of Division net returns, during the month of March (1950-1957), indicate a concentration of pike in East Harbor, or on the spawning grounds.