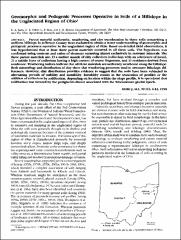 Parent material uniformity, weathering, and clay translocation in three soils comprising a uniform hillslope in Jefferson County were evaluated to obtain a better understanding of geomorphic and pedogenic processes operative in the unglaciated region of Ohio. Based on detailed field observations, it was hypothesized that at least three parent materials occurred in all three soils. The hypothesis was confirmed using contents and ratios of elements occurring almost exclusively in resistant minerals. The three parent materials are: 1) a surface mantle of silty colluvium (colluvium with an admixture of loess), 2) a middle layer of colluvium having a high content of coarse fragments, and 3) residuum derived from sandstone. Weathering indices indicate that all three materials are uniformly weathered along the hillslope. Both mineralogy and distribution of clay show that weathering processes tend to attenuate lithologic differences. However, clay distribution provides evidence to suggest that the soils have been subjected to alternating periods of stability and instability. Instability results in the truncation of profiles or the addition of colluvium by solifluction, depending on location within the slope profile. It is speculated that solifluction was favored by the periglacial climate associated with the Wlsconsinan glacial epoch.