Fishes of the Ohio River 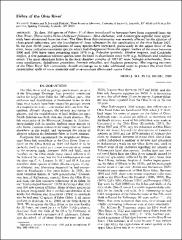 To date, 159 species of fishes (14 of them introduced by humans) have been reported from the Ohio River. Three native fishes {Acipenser fulvescens, Alosa alabamae, and Ammocrypta asprella) have apparently been eliminated from the river. The Ohio River fish community was severely affected by the siltation of clean gravel substrates, and the inundation of those substrates by the canalization of the river before 1927. In the past 20-30 years, populations of many species have increased, particularly in the upper third of the river. Some pollution-intolerant species which had disappeared from the upper reaches of the river between 1900 and 1950 have been returning since 1970 (e.g. Polyodon spathula, Hiodon tergisus, and Carpiodes velifer). A few pollution-tolerant species have declined in abundance since 1970 (e.g. bullheads and Ictalurus catus). The most abundant fishes in the lock chamber samples of 1957-87 were Notropis atherinoides, Dorosoma cepedianum, Aplodinotus grunniens, Notropis volucellus, and Ictalurus punctatus. The ongoing recovery of the Ohio River fish community should encourage us to take additional steps to protect the river from catastrophic spills of toxic materials and to reintroduce eliminated native fishes.