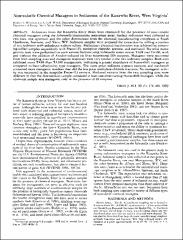 Sediments from the Kanawha River Basin were examined for the presence of non-volatile chemical mutagens using the Salmonella /mammalian microsome assay. Surface sediments were collected at two sites, one upstream and the other downstream from the chemical manufacturing complexes at South Charleston, Institute, and Nitro, WV. Sediment samples were prepared for extraction by milling a portion of wet sediment with anhydrous sodium sulfate. Preliminary chemical fractionation was achieved by extracting milled samples sequentially with Freon-113, methylene chloride, acetone, and methanol. Bacterial mutagenicity tests were performed on each solvent fraction using Salmonella tester strains TA98 and TA100, with and without the addition of Aroclor-induced rat liver microsomal (S9) enzymes. Mutagens were recovered from both sampling sites and mutagenic responses were very similar in the two sediment samples. Both sites exhibited more TA98 than TA100 mutagenesis, indicating a greater abundance of frame-shift mutagens as compared to base-substitution type mutagens. The more polar sediment extracts (acetone and methanol) contained more mutagenic residues than did the less polar methylene chloride fractions. No mutagenic activity was recovered in the nonpolar Freon-113 extracts. Methanol extracts from the two sampling sites were different in that the downstream sample contained at least one direct-acting frame-shift mutagen, while the upstream sample was mutagenic only in the presence of S9 enzymes.