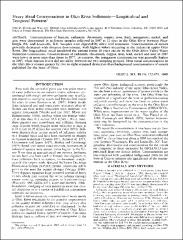 Concentrations of barium, cadmium, chromium, copper, iron, lead, manganese, nickel, and zinc were determined in sediment samples collected in 1987 at 11 sites in the Ohio River between Pittsburgh, PA, and Louisville, KY. Samples were digested by nitric acid treatment. Concentrations of metals generally decreased with distance downstream, with highest values occurring in the industrial upper Ohio River. The longitudinal trend paralleled the pattern found 10 years earlier by the Ohio River Valley Water Sanitation Commission. Concentrations of cadmium, chromium, copper, iron, lead, nickel and zinc in 1987 were lower at most sites than those in 1977. In contrast, the manganese concentration was generally higher in 1987, while barium levels did not differ between the two sampling periods. Most metal concentrations in the Ohio River remain greater by two to eight standard deviations than background concentrations of metals published for the State of Ohio.