Resource Development and Conservation History Along the Ohio River 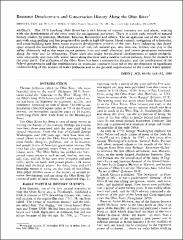 The 1578 km-long Ohio River has a rich history of natural resource use and abuse, starting with the development of the river itself for navigational purposes. There is a rich early record of natural history studies by Bartram, Michaux, Lesueur, Rafinesque and others. The navigational use of the river began with snag pulling and has progressed to modern high-lift dams. Flood control, navigation of tributaries, and canal-building have been water resource development projects of the past. Early industries that developed around the availability and abundance of coal, oil, natural gas, salt, iron ore, timber, and clay in the valley ultimately led to the more recent pottery, iron and steel, chemical, and power generation industries along the river and its tributaries. There were also major horticultural developments of apple orchards, wine vineyards, and even silk worm farms along the river and a modest button industry from the mussels in the river itself. The pollution of the Ohio River has been a concern for decades, and the involvement of the federal government and the establishment of interstate compacts have led to the development of significant understanding of the science of water pollution and to the general improvement of the river's water quality.