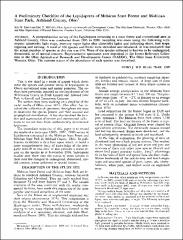 A comprehensive survey of the Lepidoptera occurring at a state forest and recreational area in Ashland County, Ohio was conducted from 1985 to 1988. Sampling was done using the following techniques: ultraviolet light traps, mercury vapor lights plus ultraviolet lights and collecting sheet, bait traps, sugaring and netting. A total of 466 species and forms were identified and tabulated. It was estimated that the actual number of species at this site was 676. None of the species collected is known to be endangered, threatened, or of special concern. Representative specimens were deposited in the Insect Reference Collection at the Ohio Agricultural Research and Development Center (OARDC), The Ohio State University, Wooster, Ohio. The current status of the abundance of each species was described.