Establishment of a Prairie on a Borrow-Pit Site at the Bergamo-Mt. St. John Nature Preserve in Greene County, Ohio 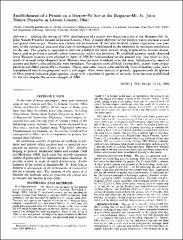 During the spring of 1986, development of a prairie was begun on a site at the Bergamo-Mt. St. John Nature Preserve located in Greene County, Ohio. A major objective of the project was to reclaim a sand and gravel borrow-pit. Prairie was chosen for reclamation of this area because prairie vegetation was present in the immediate area and that type of community is well-suited to the extremes in moisture conditions on the site. The prairie is intended to provide a habitat for some species being displaced by human disturbance and to provide a specific plant community within the preserve. To establish grasses, seeds obtained from Western sources were planted in April of 1986 by hydroseeding on the graded site. Just prior to this, seeds of several forbs obtained from Western sources were broadcast over the area. Subsequently, seeds of grasses and forbs collected locally were broadcast. For species more difficult to establish, plants were propagated in soil-filled plastic-film cylinders. These, and other plants collected locally from disturbed sites, were transplanted into holes prepared with a soil auger. After three seasons of growth, approximately 36 species of Ohio prairie indicator plant species, along with a number of species of animals, have become established on the site despite the severe drought of 1988.