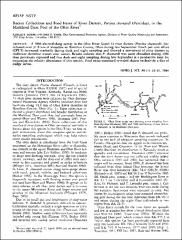 A 1986 electrofishing survey in the Ohio River found 13 river darters (Percina shumardi) distributed over 31.8 km of shoreline in Hamilton County, Ohio during late September. Catch per unit effort (CPUE) increased markedly during dusk and night sampling and showed a movement of river darters to shallower shoreline waters after sunset. Results indicate that P. shumardi was more abundant during 1986 than previously reported and that dusk and night sampling during late September is a productive time for estimating the relative abundance of this species. Food items examined revealed almost exclusively a diet of midge larvae.