Impact of Census Error Adjustments of State Population Projections: The Case of Ohio 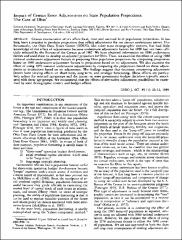