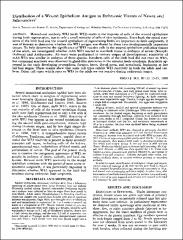 Monoclonal antibody WE3 (mAb WE3) reacts to the majority of cells of the wound epithelium during limb regeneration, but to only a small minority of cells of skin epidermis. Since both the apical ectoderm of the limb bud and the wound epithelium of regenerating limbs are important to limb outgrowth, it was of interest to determine whether the WE3 antigen was shared by these two developmentally important tissues. To help determine the significance of WE3 reactive cells in the wound epithelium and other tissues of the adult, we investigated whether mAb WE 3 reacted to non-limb tissue in embryos of newts (Notophthalmus) and Ambystoma. Ab tests were performed at various stages of development; reactivity of mAb WE3 was similar in embryos of three species. Ectoderm cells of the limb bud did not react to WE3, but occasional reactivity was observed in gland-like structures in the anterior body ectoderm. Reactivity appeared in the early developing pronephros, foregut, heart, dorsal aorta, and notochord, beginning at late tail-bud stages. These results show that some cell types exhibit WE3 reactivity in both the adult and embryo. Other cell types which react to WE3 in the adult are not reactive during embryonic stages.