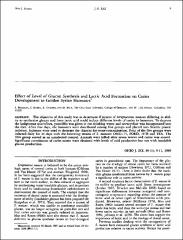 The objective of this study was to determine if strains of Streptococcus mutatis differing in ability to synthesize glucan and form lactic acid could induce different levels of caries in hamsters. To depress the indigenous microflora, penicillin was given in the drinking water and tetracycline was incorporated into the diet. After five days, the hamsters were distributed among five groups and placed into flexible plastic isolators. Isolators were used to decrease the chances for cross-contamination. Four of the five groups were infected daily for 14 days with the following strains of S. mutatis: OMZ-175, FORD, 107B and TEA. The fifth group served as an uninfected control. Animals were killed after seven weeks and caries was scored. Significant correlations of caries scores were obtained with levels of acid production but not with insoluble glucan production.