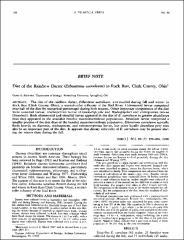 The diet of the rainbow darter, Etheostoma caeruleum, was studied during fall and winter in Rock Run (Clark County, Ohio), a second-order tributary of the Mad River. Chironomid larvae comprised over half of the diet (by numerical percentage) during both seasons. Other important components of the diet were simuliid larvae, trichopteran larvae (Cheumatopsyche and Hydropsyche) and coleopteran larvae (Stenelmis). Both chironomid and simuliid larvae appeared in the diet of E. caeruleum in greater abundance than they appeared in the available benthic macroinvertebrate populations. Stenelmis larvae comprised a smaller portion of the diet than of the benthic macroinvertebrate population. Etheostoma caeruleum typically feeds heavily on dipteran, trichopteran, and ephemeropteran larvae, but other locally abundant prey may also be an important part of the diet. It appears that dietary selectivity of E. caeruleum may be greater during the winter than during the fall.