The Early Career of John L. Riddell as a Science Lecturer in the 19th Century 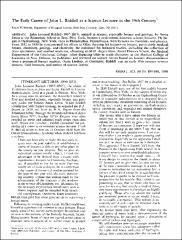 John Leonard Riddell (1807-1865), trained in science, especially botany and geology, by Amos Eaton at the Rensselaer School at Troy, New York, became a professional itinerant science lecturer. He began in Ogdensburg, New York, then in Philadelphia, Pennsylvania, with lectures on chemistry and physics. From 1832 to 1836 he concentrated his efforts in Ohio, focusing his lectures on botany, particularly medical botany, chemistry, geology, and electricity. He continued his botanical studies, including the collection of plant specimens, and studied medicine, obtaining an M.D. degree from Daniel Drake's School, the Medical Department of the Cincinnati College. After departing Ohio to teach chemistry at the Medical College of Louisiana in New Orleans, he published and lectured on science fiction based on fancied documentation from a presumed former student, Orrin Lindsay, at Cincinnati. Riddell was an early 19th century science lecturer, field botanist, and author of science fiction.