Reassessment of the Illinois Ranges of the Bigeye Chub, Hybopsis amblops, and the Pallid Shiner, Notropis amnis 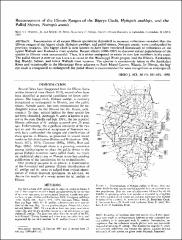 Examination of all extant Illinois specimens deposited in museum collections revealed that the Illinois ranges of the bigeye chub, Hybopsis amblops, and pallid shiner, Notropis amnis, were confounded by previous workers. The bigeye chub is now known to have been restricted historically to tributaries of the upper Wabash and Kaskaskia river systems. Recent efforts (1986-1987) to discover extant populations of the species in Illinois were unsuccessful. Thus, it is either extirpated or exists in very low numbers in the state. The pallid shiner is now or was known to occur in the Mississippi River proper, and the Illinois, Kaskaskia, Big Muddy, Saline, and lower Wabash river systems. The species is consistently taken in the Kankakee River and occasionally in the Mississippi River adjacent to Rock Island County, Illinois. In Illinois, the bigeye chub is recognized as endangered; the pallid shiner is recommended for state recognition as endangered.