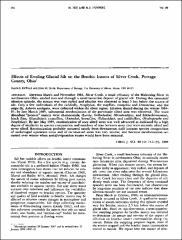 Between March and November 1984, Silver Creek, a small tributary of the Mahoning River in northeastern Ohio, eroded into and through a small lacustrine deposit of glacial silt. During this erosional/siltation episode, the stream was very turbid and siltation was observed at least 5 km below the source of silt. Only a few individuals of the caddisfly, Neophylax, the mayflies, Isonychia and Stenonema, and the snipe fly, Atherix variegata, were collected within the silted region. Siltation abated during the winter 1984-85; by late March 1985, substantial recolonization of the previously silted area was observed. The most abundant pioneer insects were chironomids, (Larsia, Orthocladius, Microtendipes, and Stictocbironomus), black flies, (Simulidae), craneflies, (Antocha), horseflies, (Tabanidae), and caddisflies, {Hydropsyche and Neophylax). By late May 1985, recolonization of once silted areas was well advanced as indicated by a high degree of similarity in species composition and numbers of taxa between areas that were recently silted and never silted. Recolonization probably occurred mostly from downstream drift because species composition of undamaged upstream areas and of recolonized areas was very similar, and because recolonization occurred over winter when aerial/oviposition routes would have been minimal.