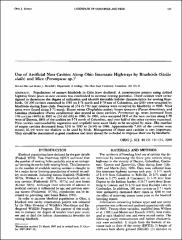 Populations of eastern bluebirds in Ohio have declined. A construction project using drilled highway fence posts as nest cavities was established to increase nesting potential. These cavities were investigated to determine the degree of utilization and identify favorable habitat characteristics for nesting bluebirds. Of 296 cavities examined in 1985 on 1-71 north and 1-70 east of Columbus, six (2%) were occupied by bluebirds during June—July. Fourteen of 374 (3.7%) nest cavities were occupied by bluebirds in 1986. Most nests were found along 1-71 north. House wrens (Troglodytes aedon), house sparrows (Passer domesticus), and Carolina chickadees (Parus carolinensis) also nested in these cavities. Peromyscus sp. nests increased from 118 cavities (40%) in 1985 to 234 (62.6%) in 1986. In 1986, mice occupied 91% of the nest cavities along 1-70 west of Dayton, 88% of the cavities on 1-71 north of Columbus, and over half of the other cavities examined. Nest cavities surrounded by vegetation and cropfield were more likely to be occupied by mice. The number of empty cavities decreased from 52% in 1985 to 24.9% in 1986. Approximately 7.8% of the cavities were rotten; 16.3% were too shallow to be used by birds. Management of these nest cavities is very important. They should be maintained in good condition and mice should be excluded to improve their use by bluebirds.