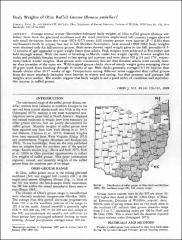 Average annual winter (December-February) body weights of Ohio ruffed grouse (Bonasa umbellus) from both the glaciated northeast and the more southern unglaciated hill country ranges showed only small deviations from the 4-year (1974-1977) mean. Hill country grouse were heavier (P < 0.05) than northeastern birds in winter, but not in fall (October-November). Year-around (1969-1982) body weights were obtained only for hill country grouse. Both sexes showed rapid weight gains in the fall; juveniles (4.5-12 months of age) appeared to gain weight faster than adults. Peak weights were achieved in November and held through winter. With the onset of breeding in March, males lost weight rapidly. Lowest weights for males and probably females occurred in late spring and summer and were about 100 g (14 and 17%, respectively) below winter weights. Male grouse were consistently heavier than females; adults were usually heavier than juveniles of the same sex. Wild-trapped grouse chicks showed steady weight gains averaging about 30 g per week from hatching through 16 weeks of age. Male chicks generally averaged 6-14% heavier than female chicks after 10-17 weeks of age. Comparisons among different areas suggested that ruffed grouse from the more southerly latitudes were heavier in winter and spring, but that summer and perhaps fall weights were similar. The results suggest that body weight is not a good index of condition and reproductive success in ruffed grouse.