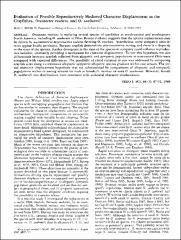 Orconectes rusticus is replacing several species of crayfishes in north-central and northeastern North America, including O. sanbornii in Ohio. Recent evidence suggests that the species replacements may be driven by asymmetrical reproductive success favoring 0. rusticus. Nonetheless, some sympatric associations appear locally persistent. Because crayfish demonstrate size-assortative mating and there is a disparity in the sizes of the species, further divergence in the sizes of the species in sympatry could enhance reproductive isolation, ultimately providing a mechanism for character displacement. To test this hypothesis the size differentials between crayfish collected from allopatric and sympatric populations in east-central Ohio were compared with expected differences. The possibility of clinal variation in size was addressed by comparing crayfish sizes along a continuous allopatric-sympatric-allopatric species gradient within one stream. The initial character displacement hypothesis was not substantiated by comparisons of allopatric and sympatric populations within or among streams for male or female 0. rusticus or male 0. sanbornii. However, female 0. sanbornii size distributions were consistent with unilateral character displacement.