Lead and Lead Poisoning from Antiquity to Modern Times 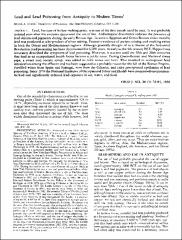 Lead, because of its low melting point, was one of the first metals used by man. It was probably isolated soon after the ancients discovered the use of fire. Archeological discoveries indicate the presence of lead objects and pigments during the early Bronze Age. In ancient Egyptian and Greco-Roman times metallic lead was produced as a by-product of silver mining. Extensive evidence of ancient mining and smelting exists in both the Orient and Mediterranean regions. Although generally thought of as a disease of the Industrial Revolution, lead poisoning has been documented for 6,000 years. As early as the 4th century BCE, Hippocrates accurately described the symptoms of lead poisoning. However, it was not until the 19th and 20th centuries that lead as an occupational health factor became a public issue. During Greco-Roman and Medieval times sapa, a sweet lead acetate syrup, was added to both wines and food. This resulted in widespread lead intoxication among the affluent and has been suggested as a probable reason for the fall of the Roman Empire. Fortified wines from Spain and Portugal, rum from the Colonies, and cider precipitated epidemics of lead poisoning. Since 1970 the National Institutes of Occupational Safety and Health have monitored environmental lead and significantly reduced lead exposure in air, water, and food.