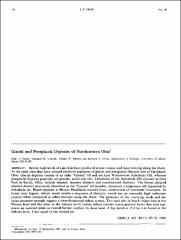 Recent high levels of Lake Erie have produced severe erosion and mass wasting along the shore. At the same time they have created excellent exposures of glacial and postglacial deposits east of Cleveland, Ohio. Glacial deposits consist of an older Coastal till and the Late Wisconsinan Ashtabula Till, whereas postglacial deposits generally are gravels, sands and silts. Lithofacies of the Ashtabula Till exposed at Sims Park in Euclid, Ohio, include sheared, massive diamicts and resedimented diamicts. The lowest sheared massive diamict previously identified as the Coastal till possibly represents a lodgement till deposited by Ashtabula ice. Beach deposits at Mentor Headlands resulted from construction of manmade structures. At Camp Isaac Jogues, deltaic sands overlie a sequence of diamicts, which has an unusually high carbonate content when compared to other sections along the shore. The geometry of the overlying sands and the facies sequence strongly suggest a river-dominated deltaic system. Two sand pits in beach ridges (one at the Warren level and the other at the Arkona level) farther inland contain coarse-grained facies that may represent an outwash plain or coastal barrier overlain by dune sand. A log dated at 13-4 ka was found at the Arkona level, 1 km south of the second pit.